So you have a bowl of cream, milk, and sugar, and you want to turn it into ice cream.  What are your options?  You could just throw it into the freezer for a while, but you’d just get a frozen block of sweet cream — not exactly ice cream.  What’s missing?  The secret ingredient: air.

Ok, so what if you threw it into the freezer, but every fifteen minutes you took it out and stirred it with a fork?  Now you have something resembling ice cream.  Not anything you could really call good ice cream, but at least it has air mixed in with the other ingredients now.

What if you stirred it up every five minutes instead?  Then the ice cream would be a little better.  What about every 2 minutes?  Or every 30 seconds?  Or what if you just crawled into the freezer, shut the door from the inside, and kept stirring continuously?  Now you’ve got something resembling good ice cream!  (and hypothermia)

When you put the mix into an ice cream machine, the inside wall of the bowl is the coldest part, so tiny bits of the mix freeze there and form crystals.  The machine’s dasher comes by and scrapes that tiny bit of frozen mix off the side of the bowl, making room for more mix to freeze there, and form more crystals.  The faster the dasher moves, the more crystals you get, and the smaller they are.  Which is why good ice cream has lots and lots of tiny little crystals, and bad ice cream (like the kind you made when you stirred it every fifteen minutes) has fewer crystals, and each one is larger.  If the crystals are large enough, you start to feel them on your tongue, and it feels icy rather than smooth. 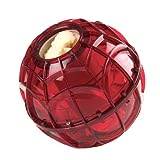 Last year for my birthday, a friend gave me one of those Ice Cream Balls [2] that you roll around on the ground to make ice cream.  The plastic ball has two openings: one goes to a metal canister that you pour the mix into, and the other goes to the open space inside the ball where you can add ice and rock salt.  The ice essentially surrounds the metal canister where the mix is, so it works the same way as an ice cream machine.  The mix freezes against the side of the metal, forming crystals.  But the dasher in this case is human-powered, when you open it and scrape down the sides of the canister.  The ice cream comes out with a pretty uneven consistency, but I had to admit, when we tried it while camping one hot weekend, it was a lot better than I expected, and we ate it all up!

The salt, by the way, lowers the freezing point of the ice water from 32 F (0 C) to around -6 F (-21 C).  If you tried to make ice cream without the salt, the ice wouldn’t be cold enough to freeze the mix, because the milk and sugar both lower the freezing point (so does alcohol — use too much, and your ice cream won’t freeze).  When I opened up the ball to add more ice, I poured out the water while straining the remaining ice with my fingers.  WOW.  My fingers were instantly frozen.  It was a LOT colder than normal ice water, and I won’t be doing that again.

I’m gonna just come right out and say this.  There’s no way to get around it.  My ice cream machine is the Lello 4080 Musso Lussino.  There, I said it.  Yep, it’s expensive.  Like $700 expensive (it was $600 when I bought it four years ago, but still).  I wanted the best machine I could get, and even after four years, I’m convinced this is still the one.  It makes 1.5 quarts in about 30 minutes, which is pretty much the same as all the home machines.  But there are differences. 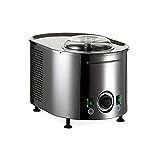 But there are a lot of good machines in the $50-250 range too.  All of them will make ice cream, and most of them will make good ice cream.  But in case you don’t want to spend $600-700 on an Italian ice cream machine, here are some other options.  Some use a coolant-lined bowl that must be pre-frozen at least 8 hours (many people say 24 hours) and some have a built-in compressor freezer like mine.

Machines with a coolant-lined freezer bowl:

These machines are fairly inexpensive.  They tend to have plastic parts, and bowls that have to be pre-frozen, but many people say they work well if you’re not making a lot of ice cream and don’t mind having to keep the bowl in the freezer.  They tend to have dashers that spin at slower speeds compared to the Musso Lussino’s 80 RPM.  The Cuisinart ICE-20 seems to be a good entry-level machine and is very popular. 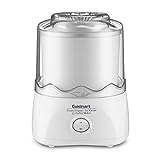 Machines with a built-in compressor freezer and plastic parts:

These machines are more expensive because of the compressor, but give you more freedom to make as much ice cream as you want, when you want it.  They tend to have stronger motors, but with plastic parts, and tend to have dashers that spin at slower speeds compared to the Musso Lussino’s 80 RPM. The Cuisinart ICE-50BC is very popular and seems like a good compromise between size and price.  Although two of the machines are called “gelato” machines, they’ll definitely make ice cream as well — and for that matter, any of the “ice cream” machines listed on this page will make gelato (or sherbet, or sorbet) too.

Machines with a built-in compressor freezer and stainless steel parts:

Like the machines with plastic parts above, these have a built-in compressor and stronger motors, but the models below have stainless steel parts.  The 4080 Musso Lussino I have also runs at a much faster 80 RPM.  If you’re serious about making ice cream, one of these may be what you need.  Both machines are made in Italy by Musso (and distributed in the USA by Lello) and seem very durable because of their stainless steel assembly.

These are the “old style” machines, but they still make good ice cream, and they make a lot more of it than the machines above.  These two in particular seem to be made of good quality parts like stainless steel and wood.  Of course, they’ll make a bit of a mess and you’ll need to buy ice and rock salt, but they should work well for large picnics outside, with or without electricity. 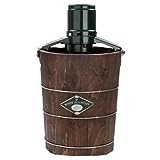 So get a machine and start making ice cream!