We flew from Texas up to Rhode Island to visit some friends, and I wanted to take some homemade ice cream with us.  Actually our friend had jokingly asked me to bring some, so it got me wondering if it really was feasible.  It turns out, it is!

Ice cream is great, except for that whole melting thing.  I’ve been able to transport it in the car for an hour or so pretty easily by just packing pint containers in a cooler so that the containers are completely surrounded by ice.  Transporting it on a plane however, was going to be a fun challenge!  I needed to figure out what kind of container to use, where to get the dry ice, how much of it to get, and if the airline would even let me take it.  And after all that, I just knew I’d end up with several containers of ice cream soup.  At least it would be homemade.

Dry ice is carbon dioxide (CO2, the same thing we exhale) compressed into solid form.  When it “melts”, it changes from a solid directly into a gas without going through the normal liquid form — as opposed to how normal ice changes from solid to liquid to gas as it melts and then evaporates.  This process of going directly from solid to gas is called sublimation, and is a handy thing when transporting ice cream.

Another handy thing about dry ice is that it’s -109 degrees F (-78 C).  That’s minus one hundred and nine degrees!  Which, coincidentally, is approximately one hundred and nine degrees colder than my freezer!  Needless to say, you need to use gloves when you handle this stuff.  I was lucky enough to find a grocery store near me that sold it in 10 pound blocks for pretty cheap.  A company comes by once a week and refills the freezer, kind of like the normal ice freezers you see everywhere except that these are more like a deep freeze you’d have at your house, with a lid on top.

Another interesting point is that whole carbon dioxide thing, and the fact that it’s the same as what we exhale.  That means it’s fairly safe, but it also means you’ll suddenly find yourself suffocating if you’re foolish enough to stick your head down into a freezer full of dry ice at the grocery store, trying to pick out a big piece — not that I would know anything about that — cough cough.  ;-) 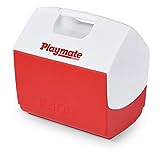 Ok, so I’d worked out where to get the dry ice at least.  Next was the airline’s rules, since they have fairly strict limits.  We were flying on Northwest, which at the time, allowed up to 5.5 pounds of dry ice to be carried in a “vented” container.  The container can’t be airtight, because the gas from the melting (I mean, sublimating) dry ice has to escape somewhere.  At the time I did this last year though, the airline didn’t let you take that much dry ice in carry-on luggage, so I had to check the bag.  That made things even more complicated, because I had to think about the container a bit more.  I ended up using one of those Playmate coolers with a flip top, because it was fairly sturdy but not airtight.  I had read that packing all the extra air pockets full of towels made the dry ice last a lot longer, so this was about the right sized container to take several pints of ice cream.  And I added straps around the outside to make sure it didn’t flip open at some point during the trip.

The next task was to figure out how much dry ice I needed.  This was a bit harder, because the rate of sublimation depends on a few different factors.  I did find this web page at Continental Carbonic though, that has a nice table showing the number of pounds of dry ice needed to transport frozen food a particular number of hours.  Since I calculated that it’d be about 12 hours from the time I packed the container at home until the time I unpacked it in Rhode Island, it looked like the 5.5 pounds I was allowed to use would be about right.

I later did an informal test with a 7 pound block of dry ice in the same cooler at room temperature, with the dry ice completely surrounded by towels to take up the airspace, and calculated the rate of sublimation to be 1 pound per 5.75 hours, or about 2.7% per hour. It could probably last even longer in the cargo hold of an airplane at high altitude because of the lower temperature.

I decided to do a test run the night before, to make sure this was all going to work (because, yes, I am an ice cream geek).  I got the dry ice from the store and packed up the cooler.  First a layer of towels on the bottom, then the ice cream with more towels stuffed into the empty spaces, then the dry ice on top, and then more towels over the top of the ice.  The next morning, it was a successful test and everything was frozen rock solid.  But of course, I had to go buy more dry ice again.  Back to the store, which luckily still had more of it, back home to weigh the ice and cut it down to 5.5 pounds (a hammer works well for that job), and pack everything once again.  I put a note inside saying what it was, and how much dry ice I had, just in case it got searched.  I also put signs on the outside, clearly stating that it contained dry ice, which was another requirement of the airline.  And off to the airport we went, with the clock now ticking.  Today would not be a good day for airport delays.

When I stepped up to the airline counter, all ready to hand off my precious cargo, the lady took one look at the dry ice sign and said, “Oh, that can’t go on the plane.”  What?? After a bit of frantic explanation and a couple of phone calls where she checked with her supervisor, everything was ok, and my heart rate slowed back to normal.  And off the cooler went down the luggage belt, into the depths of the airport.

We unfortunately had to change planes along the way, and I just knew something would go wrong there too.  As the baggage handlers were moving all the luggage between planes, I had visions of chocolate, vanilla, and various other flavors of homemade ice cream spilling out across the tarmac in a work of modern art.

But lo and behold, it arrived in perfect condition, with the container sitting upright, straps still on, riding along the belt with the other luggage.  I realized later that it probably looked like a container full of body parts or something, so I have a feeling it was handled fairly carefully.  :-)

When I opened it up back at our friends’ house, there was still quite a bit of dry ice left.  The ice cream was so cold (approximately minus one hundred and nine degrees, I’d guess) that the plastic containers started cracking when I tried to open them.  I actually had to put them in the fridge for a few minutes to let them warm up.  After that they were absolutely perfect, just like I’d taken them out of my freezer at home.

Mission accomplished, and our friend that requested it was thrilled!  :-)